I don’t know about anyone else but when everything began shutting down we had LOADS of time with not much to do.  Work had all but dried up and well, no work meant no money! Top that off with social distancing and a sudden leap to Level 3 restrictions and we were basically living life at home 24/7.

Anyway, we have a nice home.  It’s definitely comfortable and certainly big enough for the 6 of us.  Here’s the thing though … we didn’t build it so it wasn’t entirely our style.  Who’s feeling me?  It’s nice enough … don’t get me wrong but we’re not really brown earthy kinda people and let’s just say the previous owners, well, they were.

We’d already had our kitchen renovated (we used the beautiful Chris & Jenna from Kitchens by CJ for that one) and we’d already done our alfresco area and pool, as well as the best kids cubby house ever … I’ll post about it one of these days actually … which really just left our bathrooms and laundry!  Side note, we have had our kids bedroom wardrobes all updated by CJ as well so really, we legit just had the laundry and bathrooms to do.

Needless to say Clayton is pretty handy but he’s never tiled before … but hey, might as well have a crack, eh!  There’s always Google and YouTube if it’s hard, right?

We decided it might be smartest if we start small, you know, and work our way up … so we started with the kids upstairs toilet.  We figured if it look like “shit” – pardon the pun – then no one would really see it as it’s really only upstairs for the kids!  Smart cookies, huh?

So, here it is – the “before” … I’m hopeless at remembering “before” photos but I’m sure you’ll get the gist.  Just plain and boring with not much style at all.

First things first, I tried to find some inspiration by Googling … not “bathrooms” as it’s literally just a room with a toilet … that’s it!  I tried “powder rooms” and “water closets” and well, they worked a treat.  Not to mention there’s a poop load of home renovation shows on tv every night!  I kid you not – loads of them! Anyway, I decided on some fun hexagonal tiles for the floor and a herringbone pattern for the wall.

Once we’d decided we were happy with our choice it was time to rip it all out … not going to lie … what a freaking dusty mess that was but it wasn’t hard and didn’t take too long.  Truth be told Clayton did it while I just tidied up after him.

We began with the floor – obvious choice, right?  The tiles came on a kind of netting that helped keep them neat and well spaced when Clayton laid them, which was great. Once the floor was finished we chose the back wall (behind the where the loo would go) for the herringbone tiles … it’s a boring kind of room so we were hoping to add a little bit of something extra but didn’t want too much … I wasn’t after a public restroom kinda vibe. 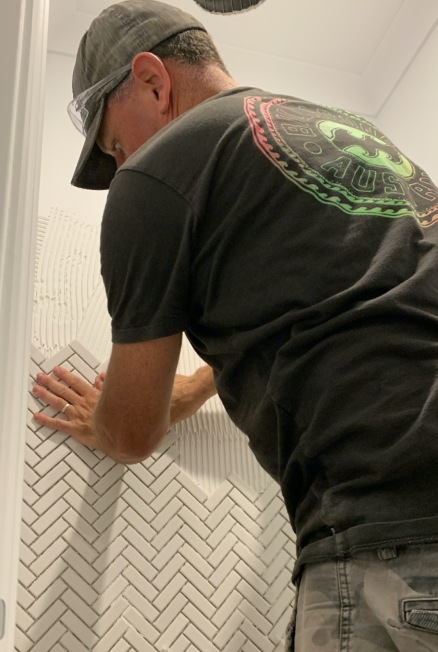 The herringbone tiles also came on a netting so they were also easier to lay – thank goodness!

We didn’t really need a new toilet … but hey, like I said, it wasn’t originally our house so a nice new toilet freshened everything up!

I’d never really thought about a black toilet before and I’ve gotta admit, I’ve never actually seen one but I figured the room was very “white” and needed something to funk it up a bit  so decided to check with good old Google and well, there they were!   Clayton wasn’t entirely convinced … nor were a lot of people actually, but let’s not kid ourselves … who’s the boss?  Am I right?  Anyway, we went with the black lavatory and I am so glad we did because we were both thrilled!  We are seriously LOVING our black loo!  It looks so sleek and perfect in there, especially with the black toilet roll holder!  By the way, you can get black toilet paper but hooley dooley, it’s expensive so we’re sticking with the white.

So, this is it … our end result!  And I couldn’t be happier … not only with the look but also the price!  It’s amazing how much you can save having a go yourself!!

A few pops of green with some faux plants, and wallah … all done!

A side by side with our “before” and “after”.

Would you have gone with a black loo too?